Last week, I mentioned briefly the issues Lake Apopka faces. This week, I’d like to talk about the origins of these problems.

Lake Apopka has a long history of human habitation and use – probably as long as 10,000 years. Numerous artifacts, burial sites, and village plots have been discovered along the shores of the lake.

White settlers entered the area in the mid 19th century, farming along the southern shores. When citrus production came to the area, growers turned to the lake and its close proximity to the Harris Chain of Lakes as a solution to their transportation needs. Prior to 1880, Lake Apopka’s outflow was primarily through discharge via the Double Run Swamp, into the Harris Chain. This wasn’t suitable for steamboat navigation, and thus in 1880 the Apopka-Beauclair Canal was excavated, attempting to link the lake to Lake Beauclair through a 12-mile long canal.

This proved more difficult than initially thought, thanks to the area’s marshy soil. The canal wasn’t really passable until 1893, when it was completed by the Delta Canal Company. After completion, water levels in the lake lowered by three feet.

The water level of the lake would prove to be a sore issue over the next few decades for local growers. More water in the lake means more protection from the cold – the lake water holds heat, protecting the citrus groves from deep frost in the winter. Produce farmers on the north side wanted a navigable canal, but citrus growers on the southern shore feared the effect a deeper canal would have. Ultimately, though, a series of deep freezes would drive citrus production away from Central Florida.

Produce farming continued. In 1941, fearing food shortages from World War II, the decision was made by the state legislature to expand farming in the area. A semi-private organization was formed – the Zellwood Water Control and Drainage District. Based in Zellwood, on the northeastern side of the lake, this district had the authority to levy taxes over its members. These taxes were necessary to fund the maintenance and expansion of a massive engineering project: the formation of the muck farms.

Some 9,000 acres of muck land were reclaimed from underneath the lake, through the creation of a levee. This muck land, much like the famed Everglades muck, was valued for its fertility. This area, once wetlands that helped to filter the lakewater, became devoted to “truck farming”, commercial farms focused on exporting produce.

After the levee was completed, the muck land was now nearly two feet below the surface of the lake, requiring major pumping operations to keep dry. Additionally, the muck itself dries out, shrinking in size by an incredible amount. To fight this, the mucklands would be regularly flooded when not in use, keeping them wet for the next season’s growing. When it was time to farm again, this water would be pumped out – into Lake Apopka. Millions of gallons of water laden with fertilizer and pesticide was now being discharged into the lake yearly.

And remember that canal? Not only was this water polluting Lake Apopka – it was being carried into the Harris Chain of Lakes, and through those, into the St John’s River. 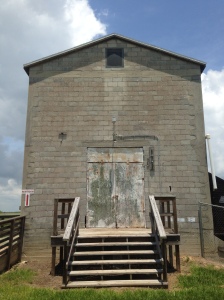 Here’s a photo I took of the last of the pump houses. This is the original structure, built in 1941, and it’s about two and a half stories tall. Today, its used by the St Johns River Water Management District, to keep the North Shore Restoration Area (post muck farm) flooded with water.

This link is to an item from the collection, a pamphlet describing the Zellwood District and its operations. It was written by Henry Swanson, an agricultural extension agent, who was heavily pro-agriculture. You can get an idea oved the kinds of criticisms being levied against the district, even as early as 1962, from Swanson’s rebuttals .

Week 2: The Canal and the Muck Farms

The FOLA archives hold material relating to the environmental history of Lake Apopka and the decades-long battle to end pollution of its waters, and restore the lake to a healthier state. The FOLA archives hold material from as early as the 1930s, but the vast majority of documents are from post-1991, when FOLA was formed. These documents include scientific studies of the lake, eyewitness accounts of pesticide discharges and fish kills, the personal correspondence of those involved in these issues, and newspaper clippings revealing the public perception of the lake and its problems. These documents each reveal their specific facet of this environmental history, and taken together, a narrative emerges.

The story of Lake Apopka is often ignored in enviromental histories of Florida, overshadowed by the more public battles over the Everglades. Lake Apopka’s pollution problems were so severe that restoration was often put on hold in favor of more achievable goals. Lake Apopka was seen as an example of unchecked pollution, a warning of the dangers of eutrophication and fertilizer runoff – not an environment that could be saved.

The FOLA documents show, however, a history of attempts to save the lake. The earliest organized effort would have been under Claude Kirk’s tenure as governor of Florida, 1967-1971. Kirk formed the Lake Apopka Restoration Council, at the urgings of his aide, Nathaniel Reed. Reed would go on to become something of an enviromentalist legend in the state of Florida, participating in conservation battles across the state, and even in Washington, where he served in two presidential administrations. Included in the FOLA archives, and possibly nowhere else, are the weekly reports of the Restoration Council, and correspondence between Reed and Orange County locals concerned for the lake.

The Friends of Lake Apopka themselves were formed in 1991, spun off from a subcommittee of the Western Orange Chamber of Commerce devoted to ending agricultural pollution in the lake. The Friends formed in response to proposed changes by the St. John’s River Water Management District that would allow the Zellwood farmers, on the north shore of Lake Apopka, to continue farming (and polluting) for another ten years. Unwilling to accept this, FOLA began their campaign to end this pollution and begin restoring the lake.

This is only a brief introduction. I have worked on this project for several months already, and have digitized files from the 60’s up to 1996 – so there’s a lot of history to post about. In conjunction with my digitizing of the physical documents, I write metadata entries that allow the digitized items to be searchable and accessible through the RICHES of Central Florida interface. A few have already been uploaded as of this writing – with hundreds more to go.

Week 1: An introduction to Lake Apopka